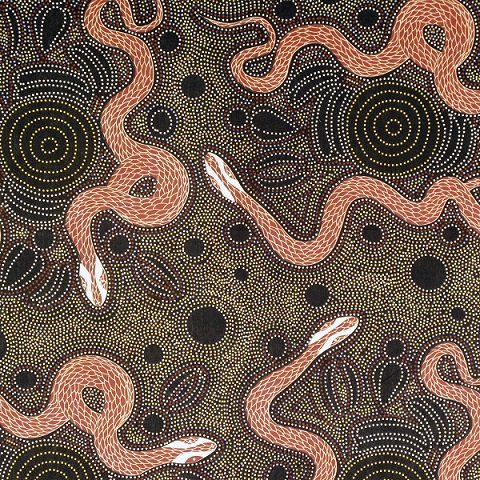 In the Dreamtime all the earth was sleeping. Nothing moved; nothing grew. One day the rainbow serpent woke up from her slumber and came out of the ground. She travelled long distance and became tired; curled up and went to sleep. Her body was heavy which left marks of her sleeping and her winding tracks. Then she came back to the original starting place. She found a hole at the place and thought that there were some frogs. She asked the frog to come out of the hole. The frogs were slow to come out of the hole. They drank too much water and their bellies were heavy. They eventually came out. Amusingly the Rainbow Serpent tickled their stomachs and the frogs laughed. When the frogs laughed, the water came out of their tummy. This is how the lakes and rivers were filled with water, and grass and trees sprung across the land. One day when the Rainbow Serpent turned around, she saw an emu sitting close to a big tree. The Rainbow Snake liked the Emu and became her friend. Emu told the snake that she was laying eggs. A few days later some small emu chicks started walking around. Rainbow Snake became happy and decided to stay. Rainbow Snake also made laws for the inhabitants of the place allowing everybody to live in peace